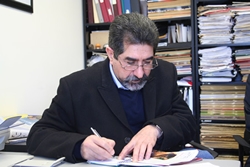 By: Christiane YOUSIF  for Roji Kurd.

Adopted surname: Benitorof (originated from his Arab birth place). He is an Iranian Arab writer, journalist and rights activist, member of the Association of Iran’s Writers and English PEN honorary member, living in exile in London. He studied BA in Administration, in Tehran University.

Married in 1980, his wife also originating from Al-Ahwaz, with two children (a son and a daughter), his son teaching PhD in Cambridge and his daughter teaching journalism.

For a period of three years, during the Shah era, he acquired many jobs mainly in the education system as a teacher.

In 1979, after the revolution, in which he actively participated, he continued teaching Administration and the Arabic language at a High School level in Al-Ahwaz, until 1981, a crucial year in the 30-year-old man’s life; he was fired and accused of being “pro-Arab” and a “leftist”, which eventually led to imprisonment in Charchir prison, in Al-Ahwaz.

He was kept, in the time of war between Iran and Iraq, in Revolution guard prisons for three weeks, with his family uninformed of his wellbeing and whereabouts. Days became weeks for the family who was searching every hospital to see if he was even alive. In solitary confinement, every night, twenty to thirty people were executed and “we heard the sound of shooting”, said Yousef. Imprisoned with the likes of professors, oil national company workers and leftists, most of them were Arabs, he was mentally harassed and often repeated to his prosecutors the words: “My weapon is my pen”.

After eventual information of the missing Yousef reached his family’s ears, they quickly acted and contacted a friend in the revolutionary guard, who, at his own risk, helped Yousef departure from the prison. “We tried to get you back but there was no chance” he was much later told in prison in 2005, as he fled to Tehran, a city of immense population.

Living in semi-hiding, in Tehran, he worked for private companies, fearing for his life he did not put pen to paper for five years. After 1988, freedom to write was an urge he couldn’t resist as the end of the war was upon them, which meant a decrease of security in Iran. He published hundreds of articles in Persian and Arabic discussing both cultures and politics for prominent newspapers such as Iranian Hamshahri, Salm and Aadineh Magazine, Al Safir Lebanon, Kuwaiti Al-Qadas, BBC amongst many others. Books and translations of literature and short stories came to fruition and notably two fictions (titled ‘Sharbat eyes’ and ‘Hitta’, a local Ahwaz hero). Even though Yousef held his tongue and avoided writing about political topics for a while, he eventually appeared on multiple television interviews criticizing the treatment of Arab people in Al-Ahwaz region.

Years later, in the afternoon of April 25th, 2005, he was arrested in his own home, in Tehran, by eight armed Iranian Intelligent Service agents, who didn’t fail to take away every file, note and belongings with them. Unfairly accused of guiding Arabic people towards protests against the regime, he was brought to the 209-political section of Evin prison, where he was woken up the very next morning. 4am, Yousef believed an execution was imminent as the guards were not clear of their intentions and the trauma of previous imprisonment led to a clear conclusion that this was the end. To his ‘relief’ he was being transferred to Ahwaz secret prison for solitary confinement, where he was mentally tortured in a cell of 2m x 3m, in fifty degrees Celsius heat, a cell where lack of electricity was common and a lack of his constitutional rights was the new norm. Taking away his glasses in order for him not to read nor write.

After being kept in absolute solitude and complete fear for 65 days, Saleh Kamrani (an Azeri now in Sweden) and Saleh Nikbakht (a Kurdish now in Iran) came to help him to defend his case and cause. Every few months, he went to court and after three years, in August 2008, a verdict was decided to a five years prison sentence, to which the High Court accepted.

After the news broke, Yousef was told to flee before being sent back to prison because the eventual inevitability would certainly be death! He bailed out and took his first chance to leave the country for a breath of fresh air, a breath of freedom but cut from his family having to leave them behind. A very emotional and conflicted day had just begun on November 3rd, 2008 when he got a ticket to Istanbul; “will they find me again?” “Will I finally escape this torment?” His wife and daughter suddenly arrive at the airport gate bidding farewell not knowing if they would ever exchange words again. Weeks are now months, we find Yousef days after spending New Year’s Eve full of hope that a reunion with his family is on the horizon. After a short Istanbul stay, a political asylum was acquired in the United Kingdom in August 2009 and his wish for a reunion had to wait until December of that same year when his wife and daughter finally joined him in the UK.

In 2016, he received UK citizenship and is currently still actively involved in both Persian and Arabic media doing his part for the Ahwazi Arab people, using his words and his pen.

What does the future look like for Yousef and Al-Ahwaz?

“The Al-Ahwaz or Arabistan region is a state in SW Iran, with its independent and autonomous history and its own culture and was independent and autonomous for over 500 years ever since the 15th century up until the 20th century. In 1925, the Shah abolished the sovereignty of our region, it means that for more than 8 decades, We, as Ahwazi Arab people, have been suffering from national oppression and anti-Arab racism in Iran. I think the Iranian regime cannot continue this situation for a long time. If the minorities are coordinated and join forces, we can be on the right track to a more peaceful path. If the regime resists the demands, a civil war will be the most likely outcome. The Persians have confessed that the main issue to the Iranian future is the sense of national unity, but we, as non-Persian nationalities, in addition to that, consist on democracy, ethnic pluralism and federalism in Iran.”