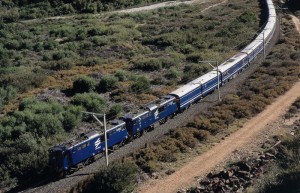 The train stamps and pounds the road, steel pounding on steel. The train car, like a cradle, rocks me through the narrow tunnel of time. The noise is nerve-racking at first, but, in time, one gets used to the moaning sound of steel. I try to fall asleep in an attempt to escape the chattering of two students sitting across from me. It is an endless tunnel. The night declares its dark arrival from behind the glass, and the world sinks into the murk; I cannot see anything anymore. The train stamps and pounds the road.

I find myself at the window; a great river comes into sight. Roaring waves, crossing the shoreline, touch the wheels of the train. The train, however, does not stop; in fact, it rushes along speeding madly. I feel I have been detached from space and time; I have never seen a train like this; what an immense power!

At one point, due to its enormous velocity, I thought the train had halted. I can see the people better now. A great number of them stand on the shore, gazing into the waters of the river.

I look at them with awe; some are looking around in the shore for rocks to throw at something in the river. The water does not look blue or brown; it has another tint to it. It looks indigo, the same as the Nile, but I know it is not the Nile.

Is it Tigris or Karoon? I do not know; I cannot recognize it. I hear a voice close by; it says, “They blindfolded him, and there were traces of beating and kicking on his body.”

People are beaming as if enjoying a movie. I do not know any of these people or places. I have become tongue-tied unable to ask anyone what is going on. The water is taking on a reddish colour little by little. As the crimson pool spreads in the river, the fish and the sharks commence their feast dance.

I watch some guards, riding their horses, waving their whips above their heads, coercing the uninterested to stone the river and everything in it. I hear the voice again: “They threw him in the river right after the execution, so that nothing is left of him.”

In a matter of minutes, the number of people gathering on the banks of the river increases greatly, while the number of stones heading for the river grows exponentially, whereby one can hear their collective thump as they hit the surface of the water. It appears to me as though there ware a layer of ice and glass covering the surface of the water. This layer starts to crack as a result of the stone shower striking it from all sides. The weather is mild. The people speak of things I cannot understand; I feel like a stranger, as if in another dimension.

The oddest of all is that I could see everyone, but no one seems to take note of my presence. I follow their carefree and merry gazes, standing on the opposite banks of the river, staring into the water.

The weather alters, all of a sudden; a tornado forms, black smoke rising. I feel, for a moment, that I am choking; the tornado, however, does not last and the blue sky reappears shortly after. I did not know that the human body floats and does not sink down to the bottom of the water.

The body has been mutilated; it is missing its legs and arms. However, there is quite an astonishing quality about it. The body is still breathing and has some sort of life in it. I hear the voice a third time, stating, “They drowned him because of his thoughts.”

I look carefully; one of the body’s arms and its right leg are floating close by; the other arm, along with the left leg is farther away from the body. Despite being butchered, the carcass defies death. Is he alive? I cannot even think about the answer. There is no point in thinking; I can observe happiness and extreme felicity in people’s faces.

On the spur of the moment, an uproar rises distressing the crowds; everyone turns their head towards the middle of the river – where the chest and the head of the body float. I spot his bruised lips moving, perhaps saying a prayer. Everyone is sharing the same sense of bewilderment, what a bizarre scene! God forgive. Some flee and others remain, possibly curious to discern the truth.

The voice begins to rise gradually, although his words are still incomprehensible. A deadly silence falls on both banks of the river. No one lets a single sound out. Even the guards are mute. The crowds seem dead; appear to have lost their souls, while the dead man gains back the life that had escaped him.

The voice becomes clearer until I can hear it say, “I am the truth, I am the truth.” I cannot wait to discover what is going on, and how and why this mutilated body utters these words.

I am lost in these thoughts as a large rock hits the glassy surface of the water.

I open my eyes and jump from my chair. I can see some cracks in the window. The students are still chattering. And the train stamps and pounds the road.