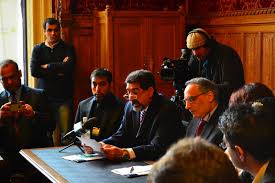 A speech by Yousef Azizi Bani Torouf, General Secretary of the Center for Combating Racism and Discrimination against Arabs in Iran at the Ahwaz human rights meeting in the UK’s Houses of Parliament, 15 May 2013

The Arabs of southwest Iran once enjoyed a complete and absolute autonomy that Persians called their region Arabistan in recognition of its Arabic identity.

After the overthrow of Sheikh Khaza’al – last Arab ruler of Arabistan – by king Reza Shah , the Ahwazi Arab people lost their self government and power in 1925. From this date onwards, this people have suffered national oppression, that is a box containing political, economic, cultural, lingual and racial discrimination. I will briefly discuss this issue.

The region fell victim to political centralisation and the Pahlavi dynasty’s racist nationalism. Since then, the Arabs have suffered persecution at the hands of successive regimes. Even place names have been Persianised. Arabistan is now officially known as Khuzestan to eliminate its Arab identity.

With Persianisation has come hardship and misery. Discrimination is seen on a daily basis in Iranian literature and among Iranian elites and intellectuals, spread through media and books. All cultural expression is controlled and repressed by the state. Arabic music, customs, theatre, books and newspapers are banned or semi banned. The non-Arab minority in the region have 100% control of the press, which avoids Arab issues. Even activists who study Arab history privately are persecuted, such as the scholar Ghazi Heidari who was sentenced to over 10 years imprisonment.

Discrimination is institutionalised with less than 20% of top positions in the Arab-majority province going to Arabs with the rest going to outsiders. The region also has the highest rate of executions in Iran. Karoon Prison, where political prisoners are held, is the worst in Iran, especially after the Arab Spring. Ahwaz is the most polluted city in the world, as the UN has said.

Economically, Ahwazis endure poverty on a par with Africa. The situation is so bad that Iranian media have called it “black poverty”. Poverty in the cities of Arabistan is along racial lines. Around 70% of the population in the cities are impoverished indigenous Arabs and the rest are wealthier non-Arabs.

Unemployment is recognized as a serious problem among Arabs in the province due to refusal to employ local people in industry. The lack of employment opportunities caused by discrimination has fuelled unrest among Arab youths. Those in employment struggle with consistent non-payment of salaries and repression of trade unions, which prevents them from organizing collectively.

Arabs endure poor educational attainment. Illiteracy is very high particularly among women. This is due to lack of instruction in Arabic, as mother language, and a high school drop-out rate. Farsi is non – native language for Arab students and so 33% leave at primary school level, 50% by secondary school level and 70% by high school level. The government has even shut down private Koran classes to teach people Arabic.

Health statistics show that as a result of poverty caused by discrimination, Arabs are suffering malnutrition and low life expectancy. The Deputy Mayor of Ahwaz City has claimed that 20% of deaths in the past two years are among children. The municipality has not announced the specific cause of high infant mortality rates in the region. Previous surveys have indicated that malnutrition affects around 50 per cent of children in Arab populated districts. Few years ago official Jomi Islami daily announced that 80 percent of Dasht-e-Azadegan city or Benitorof and Howiza are suffering from malnutrition.

Discrimination against Arabs in employment and housing is becoming a major political issue in the Arabistan region and is fuelling political revolt. In the presidential election campaign, the issue of anti-Arab discrimination is often raised for electoral purposes or by factions within the regime, who seek to manipulate a desperate population while ensuring they do not have a voice of their own. This happens when people live on the sea of oil or 80 percent of Iran’s revenue comes from this region

However, attempts by the region’s members of parliament to send just 1.5 per cent of oil revenues back to the area to fight social deprivation have been opposed by the government. Meanwhile, the Iranian regime is continuing its policy of “ethnic restructuring” to make Ahwazi Arabs a minority in their homeland Arabistan (formally Khuzestan) with dozens of settlements planned on confiscated land.

The international community should extend a hand of solidarity towards the persecuted Arabs of Iran and specially in UK the parliament and other NGO organizations who could play an active rule in this field.