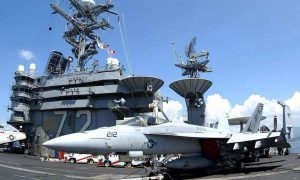 (This article based on interview with Yousef Azizi)

The strings holding the 2015 Iran nuclear deal together have been gradually snapping since President Donald Trump announced US withdrawal on May 8, 2018. Following a year of “maximum pressure” from the US administration, the unravelling of the agreement, which was designed to ensure Iran’s nuclear program will be “exclusively peaceful” by limiting its uranium enrichment program until 2030, is now accelerating with Iran’s announcement that it could stop complying with key parts of the deal. All of this comes against a backdrop of an escalating war of words between the Washington and Tehran and a troubling series of events in the Middle East in recent weeks. Both Iran and the US say they are not interested in war but the latest round of unsettling news and dangerous escalations have the world on edge.

A SERIES OF DANGEROUS ESCALATIONS

The recent round of escalations began when the US raised the stakes by saying it has intelligence that suggests Iran plans to attack Americans in the Middle East. On May 5, National Security Adviser John Bolton announced that the US was deploying an aircraft carrier and bomber planes to the Persian Gulf in response to “a number of troubling and escalatory indications and warnings” of threats from Iran. In a statement, Bolton said the move was meant “to send a clear and unmistakable message to the Iranian regime that any attack on United States interests or on those of our allies will be met with unrelenting force.” He said that the US “is not seeking war with the Iranian regime,” but added, “we are fully prepared to respond to any attack, whether by proxy, the Islamic Revolutionary Guard Corps, or regular Iranian forces.”

At the time, it was unclear exactly what that intelligence said, but while the facts are still in short supply, reports in the days since have provided a bit more clarity. Iran apparently intended to target US troops in Iraq and Syria, or even use drones against Americans in a key waterway near Yemen.

Three days later, Iran marked the anniversary of President Donald Trump withdrawing the U.S. from Tehran’s nuclear deal with world powers by announcing it also would begin backing away from the accord. It set a 60-day deadline for Europe to offer it a better deal before it would begin enriching uranium to higher levels that the West fears could allow it to obtain atomic bombs. These actions remain banned by the agreement. After Iran said it would retaliate, European powers rejected Iran’s “ultimatum”, urging the regime to stick to the terms of the 2015 agreement despite America’s withdrawal.

But things didn’t stop there. A few days later, four oil tankers were damaged in sabotage attacks off the coast of the United Arab Emirates, a vital waterway aggressively patrolled by Iran through which a third of the world’s liquefied natural gas and almost 20 percent of the world’s oil production flows. Two of the oil tankers belonged to Saudi Arabia and one belonged to the United Arab Emirates. The fourth was owned by a Norwegian company.

Unnamed US officials told NBC News that it’s “highly likely” based on intelligence that Iran or groups allied with it were behind the attacks, a similar conclusion reached by a Norwegian insurance company that assesses risk to shipping vessels, according to a confidential report seen by Reuters.  Iran itself denied any involvement — but one day later, a pipeline in Saudi Arabia that allows it to avoid the strait became a target as well. Yemen’s Houthi rebels, with whom Saudi Arabia and the UAE have been fighting a war since March 2015, launched a drone attack on the East-West pipeline, which carries nearly 5 million barrels of crude oil a day to the Red Sea. The kingdom shut down the pipeline in response, causing a spike in global oil prices. Iran’s foreign ministry rejected accusations by Saudi Arabia that Tehran had ordered the attack.

Nerves in the region were put even more on an edge when President Donald Trump tweeted that any conflict with the US would mean “the official end of Iran.  Soon after, officials at the Pentagon said that the US is considering a request to send thousands more troops to the Middle East. Sources quoted by news agencies said the extra personnel would be deployed in a defensive capacity. While the AP news agency said up to 10,000 extra personnel were being requested, Reuters put the number at 5,000. Officials, speaking on conditions of anonymity, said the discussions would also include a request for additional Patriot missile batteries and more ships in the area. The US has evacuated non-essential staff from Iran’s neighbour Iraq, citing “credible threats” against its forces. Any decision to deploy more troops to the Middle East would represent something of a departure for US President Donald Trump, who has repeatedly stressed a need for Washington to reduce its troop presence there.

Meanwhile, Iran remains defiant. Iran’s supreme leader Ayatollah Ali Khamenei said Iran’s youth would witness the end of Israeli and American civilization in their lifetime. “You young people should be assured that you will witness the demise of the enemies of humanity, meaning the degenerate American civilization, and the demise of Israel,” Khamenei said in a meeting with students this week.

Although the acting US defence secretary Patrick Shanahan claimed this week that the threat from Iran has receded as the result of an American show of force in the Middle East, these recent escalations have raised fears that the two nations are being pushed closer to the brink.

WILL THE US GO TO WAR WITH IRAN?

Both Iran and the US are on record denying that they want a war and its hard to see how it would be popular in either country.  But the military situation in the Middle East is inherently unstable, and there are multiple potential flash-points as the US and Iranian military forces are in close proximity across the region, and therefore the dangers of miscalculation or misunderstanding are high. Yousef Azizi, a prominent researcher in Iranian affairs, told Majalla that the probability of war is 50-50 and is dependent on many different circumstances, including what is “being discussed in Washington, especially within the narrow circle of President Donald Trump, National Security Advisor John Bolton, Secretary of State Mike Pompeo and acting US defence secretary Patrick Chanahan.”

A war with Iran would potentially be more calamitous than the US invasion of Iraq in 2003, which led to hundreds of thousands of deaths, bogged the US down in a costly and lengthy war, and helped catalyse the rise of ISIS. Democratic lawmakers have raised alarm bells about the White House wanting war, and they’ve made it clear they would oppose any military action without congressional approval. At the same time, Republicans in Congress are placing the blame on Iran for the confrontation and urging Trump to “stand firm.”

Azizi, who is the General Secretary at the Centre Against Racism in Iran, explains that there are three parts to America’s Iran strategy: “The first focuses on maximum economic and political pressure. If this does not work, and the regime does not announce its readiness to negotiate, then plan B will be in the form of strikes on sites belonging to the Revolutionary Guards, and nuclear and military installations.”

If Iran persists in its intransigent position, the US will implement plan C: “a limited military deployment (in cooperation with its allies) to stifle the Iranian regime and dry up its lifeline. This could happen on the three Islands, the eastern coast of the Gulf, the Bandar Abbas and Abu Rish provinces, or in Ahwaz, which contains most of the oil fields,” Azizi explains.

Amid the brewing tensions, Omani Foreign Minister Yusuf bin Alawi bin Abdullah visited Iran this week and said that Iran had indicated that it is ready to negotiate its foreign policy but under different circumstances and not under pressure. Azizi says that this statement confirms that US sanctions on Tehran are working and that the Islamic republic is ready to make concessions because “foreign policy” includes Iran’s interventions in Arab countries and its regional and international relations.

However, Azizi explains that there is uncertainty surrounding whether Washington will return to the negotiating table, which Trump says he wants, because in May last year the US announced a list of 12 demands covering Iran’s nuclear program, ballistic missile tests, detention of U.S. citizens and foreign policy, that Iran must meet before the US will start any negations.

“Iran seems likely to use secret diplomacy to tackle these issues as it did in the years leading up the nuclear deal in 2015. It is certain that the current state of neither peace nor war, in the Gulf cannot continue for much longer,” Azizi said.

IS THE DEAL DEAD?

Ever since Trump pulled the United States out of the nuclear agreement in May 2018, the Europeans have been desperately trying to keep it alive by continuing as much trade with Iran as possible so that Iran has an incentive to remain in the deal. The Iranians have set out a timetable for a staged withdrawal from the agreement dependent upon the actions of the EU. “This surgery is to save the [deal] not destroy it,” Rouhani said. He has also said the actions are justifiable under the articles of the deal which set out the countermeasures party could take is another party was clearly in breach of their obligations.  It’s hard to imagine what the Europeans could do in the next sixty days to satisfy Iran’s demands without being hit by U.S. sanctions they cannot afford and thus, some observers have predicted that Iran will resume its nuclear activities in July, and the deal will be declared dead.

Azizi says that the Iran deal was near its death following the US withdrawal, but now its end is accelerating as a result of Iran’s activities and its threats to Europe which could lead to its total collapse. But he says that he does not predict that Iran will completely withdraw from the deal as the Islamic Republic are aware of the grave consequences that will inevitably result.

“I do not imagine that Iran will withdraw from the nuclear agreement because that would be suicidal. Is the Iranian regime is prepared to expose itself to international sanctions similar to those before 2015, while it is currently wailing under the sanctions of one state, the United States? I don’t believe that Khamenei and his loyalists will commit such a foolish act as they are aware of the seriousness of this matter. Washington wants to transfer the nuclear file to Security Council and the G7 which will give it international legitimacy to punish Iran, this time not only economically, but military too, and perhaps in cooperation with its European allies,” Azizi explained.

“Iran’s goal is to strengthen its currently weak position in any future negotiations with the United States. Iran knows that its withdrawal from the deal will not only provoke the EU, but also its traditional allies, Russia and Chia. I don’t believe that Iran will risk surrendering its neck to the Security Council, International sanctions and the G7.  Iran is in an unenviable dilemma. But the EU is not burning all of its bridges with Iran so that it stays within the framework of a deal that has become useless to the Islamic Revolution since the US withdrawal.”