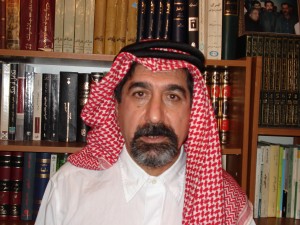 The Ahwazis’ struggle is also cultural

“Thanks to technology, the Iranian regime’s project to isolate us linguistically and culturally from our Arab milieu has been thwarted, said Ahwazi writer Yousef Azizi.
Sunday 26/05/2019
Mohamed HemamsiThe Arab minority of the Ahwaz region in Iran has long suffered from Iranian regime’s systematic marginalisation. They consider themselves deliberately forgotten or made invisible.

Ahwazi writer Yousef Azizi has refused to submit to a regime with a long record of ideologically driven injustice and marginalisation of minorities. He was critical of the silence of the international community about this injustice. Despite being imprisoned by the regime, Azizi has not backed down and continues to defend his rights and his people.

Azizi is a writer, translator and political activist. He was born in 1951 in Khuzestan province in south-western Iran and has long fought for the province’s independence. He has worked in journalism for three decades and has published 25 books and hundreds of articles in Persian and Arabic. He writes about political and cultural affairs in Iran.

The Arab Weekly met with Azizi on the sidelines of the 29th Abu Dhabi International Book Fair during a panel discussion organised by the Arab Centre for Geographical Literature.

Azizi, who was awarded the 2019 Ibn Battuta Prize for diary writing, used the opportunity to remind of the plight of the Ahwazi Arabs.

From 2005-08, Azizi was summoned to the Iranian Ministry of Security and the Revolutionary Court of Iran several times. His trial at the 15th Division of Tehran’s Islamic Revolution Court lasted from September 2007 to April 2008. He was sentenced to five years in prison for organising demonstrations in Ahvaz. The uprising of April 15, 2005, is a prominent milestone in the Ahwazis’ struggle against the oppressive policies of the Iranian regime.

Azizi said the persecution that he suffered showed the deliberate marginalisation of the Arab minority in Iran. He pointed out that other minorities in Iran, including Azeris, Mazanderanis, Kurds, Balochis and Turkmen, are subjected to the same persecution and warned of Iran’s plans to “Persianise” the region.

The Arab minority in Iran must contend with discrimination and arbitrary restrictions in education, employment, access to adequate housing and cultural and linguistic rights. Since

1928, the Iranian government has used systemised demographic policies intended to change the demographics in the minorities’ regions.

Often this would lead minorities to peacefully protest to demand inclusion in Iranian society and authorities many times responded with repression and violence.

Azizi’s book, “Behind the Sun: Diary of an Ahwazi Writer in Iran’s Secret Cells,“ chronicled the suffering of the Arab minority. Azizi said that what he details in the book is a small part of the tragedies and catastrophes that Ahwazis have faced for nine decades.

Azizi warned that the Ahwazi Arabs are in danger because the Iranian regime is trying to “Persianise” the region. He said Khuzestan province is important to Iran because the region “has oil, which accounts for 80% of Iran’s revenues. So Iran wants the Arabs to either emigrate out of their ancestral land of Arabistan or alternatively become ‘Persianised.’”

“Nine decades ago, we lost our national state and self-rule,” Azizi said. “We could not emancipate ourselves because of the Iranian regime clamping down on us on every front — economic, political and cultural. We have been fighting for survival for the last nine decades.”

He said he was hopeful that the Ahwazis would someday free themselves from the Iranian regime. Azizi said factors for achieving that were already available, notably the region’s

awareness of legitimate rights and its rejection of racial and nationalistic oppression. Technology and the information revolution have contributed to exposing Iran’s colonial designs for the region.

“Culturally, we did not come out of a vacuum. We have a long literary and cultural history. We have scholars, poets and writers whose works are still printed and published in different Arab capitals,” added Azizi.

What threaten the Ahwazis’ Arab identity, Azizi said, are the regime’s efforts to “Persianise” Khuzestan. For example, Azizi said that in schools “nothing was mentioned of our literature, culture and history. We are taught only Iran’s history.”

Azizi explained that “when an Ahwazi child starts school at the age of 6, his Arabic tongue is cut off and he is prevented from learning in Arabic. This was the standard practice in both the shah era and the current era of the Islamic Republic, which publicly claims that Arabic is the language of the Quran and of Islam. Despite the bans and the persecution, the Arabic language is the region’s second language.”

For the past four decades, the Iranian regime has not allowed the Arab minority to learn Arabic. “We were fond of our language and loved it thanks to our individual efforts,”

explained Azizi, adding that he continues to translate Arabic literature, poetry, fiction and thought. He also writes fiction and publishes research and other scholarly work.

Azizi noted that the Ahwazi elites, notably the young people among them, master Arabic thanks to their own efforts but also master Persian because they must. He described the elites as “ambassadors of Arab literature in Iran since they translate Arabic novels to Persian.”

Azizi pointed out that the Ahwazi people are exposed to Arab culture through technological developments and traditional media, as well as modern means of communication. “Thanks to technology, the Iranian regime’s project to isolate us linguistically and culturally from our Arab milieu has been thwarted,” he said.

Azizi said Ahwazi writers who write in Persian enjoy support and resources but those who write in Arabic are denied support. “Even though the [Iranian Writers] Association has always been part of the opposition, I can say with confidence that most of its member writers and poets are racist towards Arabs,” he said.

Azizi reminded that the Arab Ahwazi elite needs moral support from Arabs, including invitations to conferences and cultural, artistic and cinematic events, to integrate and open up to its Arab environment.

Mohamed Hemamsi is an Egyptian writer.